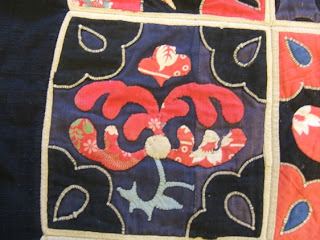 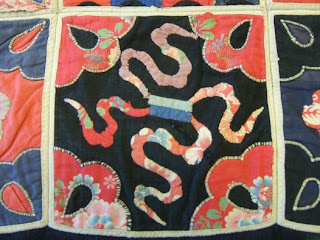 When making a quilt there is value in stepping away and coming back to the project the next day, week or sometimes months later; the same is true when researching an object. I notice new symbolism with each passing day; today it was discovering two new motifs, Buddha’s Hands --which symbolizes prosperity in Chinese culture (top) and Cao Guojiu’s (one of the 8 Daoist Immortals) Castanets or Tablets (bottom). 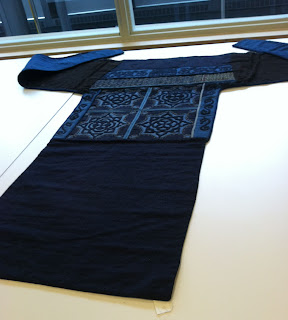 21st century Chinese girls are going to school and receiving an education. They are spending less time with their mothers and grandmothers learning the traditional sewing techniques of their culture. In the past a young girl would make a baby carrier before her marriage. Today she is more likely to go to the market and buy a finished carrier made by an older woman in the community. Or she will buy the component parts of the carrier and assemble them at home. The finished product shows evidence of the differing skill levels of the two generations.

In Taoism, “bagua,” which means “eight symbols,” represents principles of reality. There are many combinations and relate to heaven, earth, wind, water, and other concepts. They are represented by an eight-sided form we call an octagon. A Chinese bagua quilt has eight-sided blocks similar to what Western quilters call Pineapple Log Cabin.

Then I remembered a window we saw at the Beijing Antique Market. It is a design Marin calls “cracked ice.” Could this be related to the development of crazy quilts too?

Today's task was to go through supplementary material to search for similar objects, design styles, etc... In one of the books, Writing with Thread: Traditional Textiles of Southwest Chinese Minorities, from the University of Hawaii Art Gallery, I found something exciting! Its another example of this object! Appliqued half-square triangles are placed on a dark woven ground. The description describes this object as a Longpo Yi ("Dragon Wife's Robe"), a ceremonial robe worn by a female during funeral processions. I now have a name for this beautiful robe - a Longpo Yi.
- Amanda Lensch

The quilted waistcoat I am studying has a Hollywood connection. Now that makes me homesick! (I am from California).  It was purchased by a costume designer to possibly be copied for use in Bernardo Bertolucci’s film "The Last Emperor" in 1985.


Look for more of Something Unexpected, tomorrow. 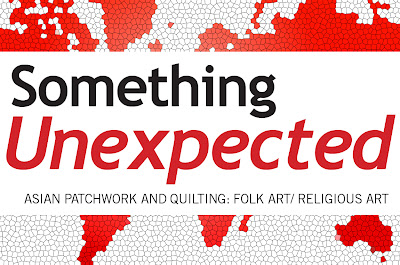 The International Quilt Study Center & Museum holds the world's largest collection of publicly owned quilts. Based in Lincoln, Nebraska, it is located on the University of Nebraska-Lincoln's East Campus and makes its academic home in the Department of Textiles, Merchandising & Fashion Design in the College of Education and Human Sciences.